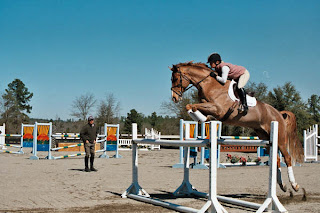 Being put on the developing riders list for 2009 was exciting in itself but partaking in the experience was really a dream come true. Everyone always asks what my goals are, in reality I've always just wanted to become better than I was the day before, the competition before and train my current horse with more style than the last one. Then there is always that peep of conversation my dad and I had when I was 8 years old.... My dad always said that one day I'd be good enough to ride for the USET, my dad was a very smart man!

Captain Mark Phillips was the coach for the entire week, he trained the "Training List" riders and the "Developing Riders list". Our first session was at Paradise Farm in Aiken, SC. This day was focused to fine tuning your cross country position, aids, and mental strength! This was Charly's first go at some cross country schooling exercises for the year so I was a bit apprehensive as to how he'd behave, I was very pleasantly surprised and had a fantastic school.

The rest of the sessions were held at Three Runs Plantation, a new equestrian housing development in Aiken, SC. Three Runs really treated us well, the footing was phenomenal, everyone was very friendly, and they held a great brunch for the riders and spectators.

Mark worked with Charly and I a total of 4 times. After the cross country schooling we then proceeded to flat sessions; Mark really like Charly's presence and movement but thought that we could work a little on submissiveness! No more being a bully! I thought this was a fabulous idea and was really impressed with how much we got done in the couple of days. Charly and I ended our last session getting to do two show jump rounds. Mark had a course set up that was HUGE. The idea of the jump school was to be very accurate with how the horse was ridden to each jump, and to dare myself and the horse to get quite close to each fence so that he really had to give a good bascule over the top.

Mark will be coming back over to the US in March and Charly and I have been invited back to his next set of training sessions :)
Posted by Havarah Equestrian at 3:59 AM No comments:

Charly starts off 2009 with style!

Havarah's Charly is back at it! We competed at Pine Top in the Intermediate on Saturday, his first event of the season. Charly is normally pretty difficult to ride in the short court arenas, but this year he was so much better and more rideable. He scored a 28.3 which put him in the lead of a very impressive class. If Charly could smile he would have had a grin from ear to ear as he flew over each of the show jumps, I saw his picture and he was nearly to the top of the standards! Pine Top is a great place and I can't wait to go back at the end of the month and take Charly out on the XC. Charly has only just gotten back to jumping this year and I didn't want to push things taking him XC this weekend. Charly was withdrawn from the competition after SJ so that he will be fresh and ready for our week with the developing riders training sessions.

I had a second ride at Pine Top. A horse named Toast of Manhattan; This horse has come a long way in just the few weeks I've been riding him, I think he has a lot of un-tapped potential and am excited for his cross country run today :)
Posted by Havarah Equestrian at 5:23 AM 1 comment: 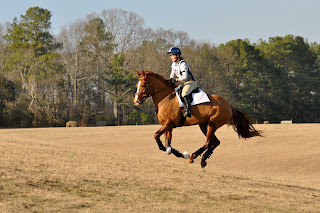 Greetings from the south!

Charly and I are on our second week at "Maple Hill South"; this is the farm Charly and the other horses I have in training are staying at while we are in Aiken. Peter Barry and his family have out-done themselves with this facility and with their kindness having us here.

Last Friday Charly had his first jump school of the season, saying that he felt like he was king kong was an understatement. Usually when horses come off of a big three day event they either are a bit intimidated the next time they start up, or very proud of themselves. Charly was definitely confident in his ability! This week has been very exciting; Tuesday was the first day that Charly and I worked on our "changes", Charly thought this was a pretty cool new game and was very good with his hind end. (often horses change late behind, but luckily... so far at least, this doesn't seem to be a problem) We then had our second jump school on Wednesday and Charly and I were back in the game as the saying goes. He felt phenomenal, after not jumping him for awhile you forget the good feeling that he gives you over a fence. Both of these rides were very early in the morning and I felt like we were in some sort of movie as we set off on a trail ride before dawn to get over to our lesson site, interestingly enough Charly seemed to really enjoy his early morning workouts.

Charly has adapted to his routine here very well, he enjoys tormenting his young pasture friend, who luckily allows Charly to boss him around and thankfully doesn't give back any "hoof"! This weekend will be his first outing at a competition. We are going to "Pine Top" which is about an hour and a half from where we stay. Charly will definitely do dressage and then Boyd and I are going to discuss the course and decide what is best for Charly at that point. Next week we have a pretty full plate with the Developing riders training sessions. Cross country schooling with Mark Phillips on Wednesday, then dressage lessons and maybe a show jump lesson.

Aiken is an incredible place to be for anyone wanting to do horse stuff, and more horse stuff. Every week there are shows within 15 minutes to a couple hours away; cross country schoolings, derby's, dressage schooling shows, training sessions and regular events. I've been busy with the other rides in the barn which include a few young horses starting their eventing careers and an Intermediate event horse that is here to tune up his dressage and show jumping skills. The Red Baron is one of the young ones and he helped start off my season on a good note with a win at his first ever event :)

Hope you are all well and staying warm, come visit!
Posted by Havarah Equestrian at 5:10 PM No comments:

My first four days here in Aiken have been a wonderful whirlwind! I arrived very late Sunday night to a gorgeous facility owned by Peter Barry. The next day I was kept busy from sun up to sun down, un-packing and organizing tack, feed, and equipment for the four horses that came with me and then meeting the 5th horse that arrived late Monday evening. I did, however, manage to meet Katie, my new roomate, the two of us are living in a double wide half a mile down the street from the horses 4 star accomadations! I have my priorities straight! Oh and I also took my first hack in Aiken; Charly and I followed Peter, Coleen and Alexandra over to Phillip Duttons to watch them in their jump lessons and learn the paths.

Tuesday was a bit of a learning curve figuring out which horses to turn out together and when. Everything worked itself out and now everyone has great buddies and neighbors and a schedule that suits them. That day we finished getting all of the 5th horses stuff settled and managed to get everyone ridden!

Wednesday was a nice lovely day with 20 degree weather and a wind chill that made it feel like 14 degree weather. I made it over to Full Gallop farm to watch the horse trials, but after a half hour decided to head back to our barn and ride in hopes of warming up!

Thursday was again a busy day, John Nunn and I unloaded an entire truck load of hay and then went cross country schooling. His young horse, Smiley, and Lynn's young horse, Rudy, both were total champions. I was very impressed with how well John and Smiley are doing in considerations of Smiley's greeness and extremely pleased with how easy going and smart Rudy is.

Today Charly and Manhatten (Liz Patrick's horse that I'll be competing this month) are heading over to have a jump school with Boyd Martin.... Then I believe there'll be some body clipping going on this weekend in preparation for the 70 degree weather that's supposedly soon to come!
Posted by Havarah Equestrian at 4:45 AM No comments: