It was a BIG weekend for team Havarah at Pine Top.

Maddie Parisan and John Nunn were both moving up to prelim for the very first time and we all had high hopes for them. And..... I'm pleased to announce that they succeeded and rocked it!

John said his dressage is always a work in progress but it actually went really well and he ended up with a 38, not bad for the first prelim dressage test!

He said his show jumping was also great, he wants to pick up the pace a little bit next time but it was a big, scopey course and Smiley handled it like a champ. They did have one rail and some time penalties but overall it was a really good course.

"Cross country just couldn't have been better, he was very clever," John said about Smiley. The nerves began and ended for John with dressage, and he was completely confident to conquer the cross country course.

Moving forward he's of course going to keep working at the dressage and show jumping, it's back to training at the Fork as John doesn't want to over-face Smiley too fast and believes he should now go have a fun, confidence building course after the big move up.

Perhaps one of the best parts of the weekend was the fact that John got to have his biggest fan, his wife Ann, here on the sidelines to root him on.

"Kudos to my coach for her dedication to helping me get there," John said in giving a shout out to Miss Molly.

She said she was confident going into dressage after a strong warm up and she put in a solid, positive test. Of course once she got the dressage out of the way it was time for the fun stuff.

They only pulled one rail stadium but it was a smooth course according to Maddie, and Carson wasn't even too strong.

Cross country was "absolutely the best part" - Mom, Kim Parisan, was more nervous than Maddie was, Im sure many other mothers out there can relate! - Maddie said everything rode really well and they finished on just time-faults. Which both, John and Maddie agreed Molly told them they HAD to have time faults - slow and steady wins the race when moving up.

So did Maddie feel a difference between training and prelim? She said training fences prepare you for prelim, but at the prelim level you can't second guess yourself. You just have to ride with confidence and that she did.

Other team members rode this weekend too: congrats to Hannah and Robyn with their double clear rounds no one had any stops! This included Molly's rides on Bugsy (who finished 4th!) and Toulousse. Rivan wasn't so sure about the hay bales but after introducing himself he jumped them no problem. Molly is super excited for Riven's season as she says he has never felt so confident and smooth on a competition course.

~MJ
Posted by Havarah Equestrian at 4:43 PM No comments:

As Molly admitted a couple weeks ago - one show was not so perfect but a great learning experience for both horse and rider.

Although she has now been in the business and atop our four legged friends for quite some time now, Molly is very humble in saying she is still, and will always, be a student to these animals.

But if you have ever met Molly Rosin, you know one thing is for sure - she is incredibly patient and she uses her understanding of a horse's (or even a person's) weakness, to figure out how to strengthen them.

It was such a rewarding phone call yesterday when I heard from Alyssa Klavans that Molly and Benny not only had a successful go around the prelim course at Full Gallop, but rather they won.

Benny's weakest phase has always been his dressage and thus when he scored a 26.8, everyone was floored and extraordinarily proud of this young event horse.

Alyssa (who shares ownership of Benny with her mother Nancy, and father, Dick Klavans), felt an enormous amount of pride watching her horse, who she has owned since his very early years, soar around the cross country course like superman.

I'm sure Molly feels a huge sense of pride and joy because she was able, in two weeks time, to take a horse who had lost some confidence and instill so much confidence he did not waver in his class.

Benny has always shown so much potential, and he has always been a "personality" here at Havarah. So, we are all incredibly excited that he is reaching new heights.

Alyssa is ecstatic that she gets to continue watching her horse grow in the sport of eventing. She feels it's a very exciting time for Benny and is excited to see where the opening of this door takes him.

Again, a shout out and thanks to all those owners here at Havarah. Molly takes pride in riding your wonderful horses and enjoys working with them on a daily basis - so we thank you for making this possible!

Click here to see a video of Benny!
Posted by Havarah Equestrian at 5:25 PM 6 comments:

It was a weekend to be celebrated by Molly and the entire Klavans family (Nancy, Dick and Alyssa).

After Benny's learning experience a couple weeks ago at Pine Top, Molly decided to pass on Red Hills and take him Prelim at Full Gallop thinking it would be a more beneficial experience.

Benny got a 26.8 in dressage. "I have no idea how he scored that," Alyssa said. The dressage test also included words such as "happy, expressive horse," these are words Alyssa isn't used to hearing when describing her horse.

He also went double clear cross country and stadium so everyone is pretty sure he won his division. Go Benny!

Molly also rode Piney this weekend and even though she had one stop cross country she had a good dressage test and stadium and Alyssa swears if she was 14 she would totally want this horse.
Benny is quite the talented horse, but Dressage is some thing he has worked quite hard at. Looks like the work is pressing off!
Fabio and Robyn saw some improvement as well. Fabio was calm for dressage and though they had one stop cross country as well, Robyn was really happy with his performance and that they were able to improve from last weekend.

It was also Robyn's birthday today so happy birthday Robyn!

Alyssa was so happy she chose to come down this weekend and watch her horse succeed.

She also got to ride Benny at Hitchcock Woods and then Molly threw her up on Toulousse and Leto so we'll get her back in the ring one of these days! Even though she's still more than happy cheering from the sidelines.

Everyone is sunburnt but happy after this weekend. Good job ladies!
Posted by Havarah Equestrian at 6:38 PM No comments:

Second Half of Sporting Days

Piney and Bugsy were Molly's mounts yesterday. Piney finished on her dressage score and really had a great show. Bugsy had a green stop at the water cross country, but Robyn says he is just such a cool horse and is fun to watch - even with the green moments.

Bryce and Toulousse had a lot of fun together - and this was Bryce's first show in Aiken! Taking a break from the 9 to 5 to play with his man who's been under Molly's wing this past month. They finished in 9th place in their novice division.

Unfortunately John didn't have the best go, but he proved that Red Horse Harry is ready for Prelim ditches!

Zhen and Hannah were the stars of this show according to Robyn. What a huge improvement and this was her first novice! She had a great dressage and her double clear rounds allowed her to claim 3rd place. Way to go banana!

Robyn was truthful that this wasn't her and Fabio's best performance, but she still had a very upbeat and positive attitude towards the whole deal which is great to hear.

They were both tense for dressage, and had a few stops in both the jumping phases and a rail. But she understands this is the name of the game with horses and also she was just so happy to have everyone there cheering her on.

There's one month left to go and the crew will be hitting Full Gallop this coming weekend.

Robyn said Molly started making plans for the trip home already and she wanted to cover her ears and say "blah blah blah" because she's not ready to come home.

It's really awesome to hear that everyone is having so much fun in Aiken - it's such a great experience and if you haven't gotten the chance to go you should definitely take the trip!

That's all for now. MJ signing off!
Posted by Havarah Equestrian at 3:24 PM 2 comments:

Posted by Havarah Equestrian at 3:24 PM No comments:

C'mon South Carolina! The eventers flocking South for the winter would appreciate some beautiful weather!

Well, despite the fear of Sporting Days being canceled due to tornado warnings (Yikes!) - the Havarah crew made it to Sporting Days and were hopefully dry for most of the day thanks to their Outback Trading Company Clothing!

Leto and Molly rocked their first training level event with a 32 in dressage and a double clear jumping round.

Molly ran Rivan in the training/prelim division to give him a good go cross country with the hopes of a more quiet and relaxed go. Well, they succeeded, and Rivan rocked it and won his division.

Maddie, who has been working extremely hard on her dressage pulled out a fantastic score of 28, and with two unlucky rails stadium ended up in 5th place.

John was a proud Papa with Smilelikeyoumeanit, having a calm and quiet dressage test then beautifully jumping around stadium earning him the red ribbon of second place.

But the weekend's not over!

Molly will compete Bugsy tomorrow along with Piney. Hannah will compete Zhen and Robyn will ride Fabio. John will also have another go on his younger horse, Red Horse Harry.

So keep your fingers crossed and don't forget to keep your thoughts on those Havarah competitors tomorrow! (And do a counter-rain dance for... well... no rain).
Posted by Havarah Equestrian at 5:31 PM No comments:

A few weeks ago we announced that Indie had found a new, wonderful home. So now we were able to get the low down on this new family and wanted to share some info with you guys!

Indie's new owner is Kelly Taylor, a really nice up and coming young rider. The two were an instant match and Kelly even schooled Indie over some prelim cross country fences on their first ride.

Kelly, pictured below, sold her first horse that she got at the age of 11 in order to buy Indie. When she got her first horse he was green, but she was able to bring him along, competing through novice and obtaining her C-2 pony club rating.

At 15, she is ready to move up the levels in eventing so made the decision to part with her first mount. She wants to compete in Young Riders and continue through her pony club ratings as well. We believe Indie will be the perfect ride for her and they will enjoy growing and competing together.

Indie definitely will be missed as he was such a familiar face here at Havarah. But it's always a proud day for Molly when she is able to make a terrific match and we believe this was just another one of her success stories!

Keep your eyes peeled for Kelly and Indie this season! 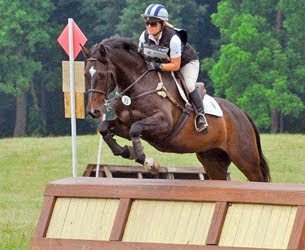 Kelly and her first horse 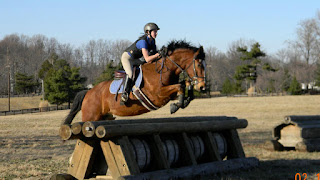 Posted by Havarah Equestrian at 4:48 PM No comments: