The begining of my memorial day weekend started off at the site of the preakness, the Pimlico Race track. One of my cow-workers had her debute race ride at a real track, she did great, however, if anyone is interested in seeing one of the big three races, I would advise the Derby or the Belmont.

I have come to realize that I'm a big fan of being a spectator at the "Point to Point" hunt meets. Secretly, one day, I'd like to be a participant, but for now an on-looker is working just fine! On Saturday, my current home town, Fair Hill, MD, held their own hunt meet and did it up in style. Imagine a big county fair, but instead of watching racing on a dirt oval track; it's all held on turf and has hudle fences and timber fences. The closest thing to riding cross country and racing at the same time!

My other big east coast adventure for the holiday weekend...a trip to the big city of Philladelphia. Anyone remember the soup nazi in Seinfeld? I was taken to Philly by a local and shown where the REAL cheese steaks are sold. This place is truely a site to see! The line (at all times, day and night) wraps around the building and they have specific rules about how to order your sandwich (so that the line stays moving at a very fast clip). They suggest, on the instructions, that you actually practice in line, if you mess up they hold the right to move you to the end of the line! Luckily I practiced, fellow line standers doing the same, messed up twice, but put out a good order by the time I was at the window. :)
Posted by Havarah Equestrian at 1:16 PM No comments:

Congratulations to Maddy Barney and the Barney family on their new family member. This combo sounds like they are going to be a force to be reckoned with for years to come....watch out! :)
Posted by Havarah Equestrian at 1:12 PM No comments:

Shephard Ranch has opened it's entries...remember to send them in ;)

Keep in touch with each other, re lodging and hauling.
Posted by Havarah Equestrian at 6:58 PM No comments: 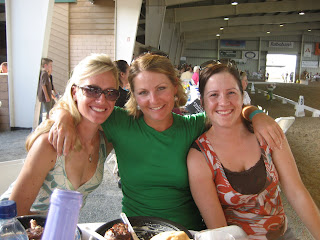 What a trip! Life sometimes works out perfectly and this last weekend was a prime example. My monthly Havarah clinic in California happened to occur simultaneously with DGBAR's last big event, MOTHER"S DAY :), and a Fresno trip by one of my long time event friends from So Cal. Oh and not to forget about all the perfect weather we had! Most of the group were able to take between 2 to 4 lessons, everyone improving with great strides from the first day to the last; I really believe that the clinic situation will end up working in everyone's favor, I think having a few days of lessons back to back really let's you understand and feel what we're trying to acheive. SO far I think it's working! DG Bar put on a fantastic show, and it was a great way to re-connect with horse riding friends from all of California. LOTS of fun!
Posted by Havarah Equestrian at 6:36 PM 2 comments: